Today I’m here to share some intel with you about a site called Freesnaphookup.com. This is a dating site that just might remind you of something called Snapchat. However, I’ll have you know that it has literally nothing to do with Snapchat (or SnapSext). In fact, it’s all just a front to get you to start spending money and upgrading your account to get with girls. Find out why this Freesnaphookup.com site is nothing but a colossal scam that the gullible consumer typically falls for.

Don’t worry, I’ve covered it all right here for you to make it next to impossible for you to make a bad as well as ill informed decision to join. Here’s all that you need to know about this site. 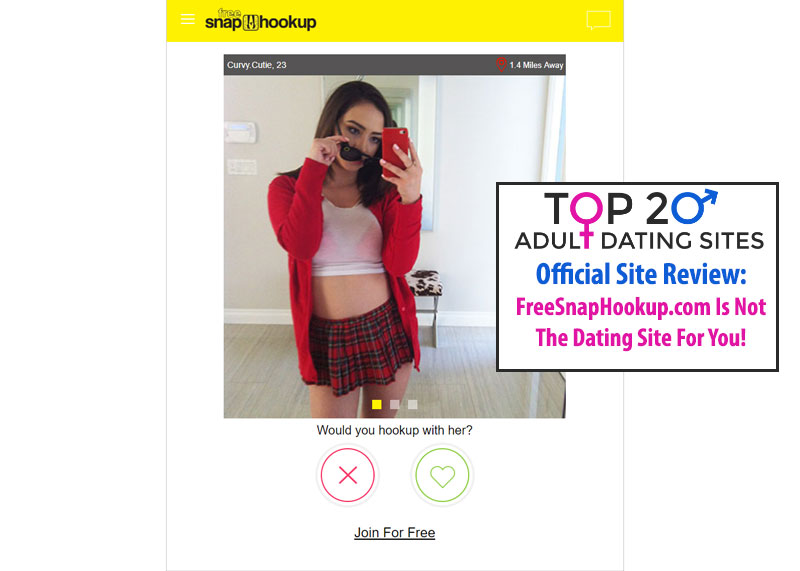 As you begin reading this review, you’ll quickly learn that there are some sites that I praise and others I completely destroy. Unfortunately, today is one of those days where I’ve just got nothing good to say about it. Unlike the old if you have nothing nice to say” saying, I’m saying it all and letting the world know just how I feel about this dating site!

One of the major realities of internet usage, especially social media of any kind, is the presence of bots. These are computer programs that have the sole purpose of appearing to be human and interacting with the receiver on the other end in as natural a manner as its creator can make it. And of course, whats to stop this clever scam weapon to be used on dating sites.

FreeSnapHookup.com is chockfull of bot profiles of women that are created by people paid to do so. There are no real women behind these profiles and the pictures and descriptions are only there to create a sense of reality. Everything on this site relative to a female profile is completely phony.

They try to lure men in with these fake profiles and the pictures of beautiful women apparently only waiting for them. Thats how they con them into buying a membership and staying for the ride. All of these facts, as is often the case, are buried in the fine print of their Terms and Conditions page. That long list of dull points that only Bilbo Baggins ever read, and are hence provable without a shadow of doubt.

In the Terms and Conditions page they mention that some of the profiles may be fictitious or models or bots, which is related to their program call Love Stars. They also mention here that it is impossible to physically meet with its female members.

Which is only to be expected since they don’t exist in the first place and are only placed there to rip people off and con them in handing over their money. The sham profiles create a false image of the website, which makes new users think that it is used daily by beautiful women and it would be easy to strike up a relationship with one. When in reality there is no one there on the other end.

The chat messages and emails a user receives on signing up on the site are completely fake too. They are auto generated by bots in hundreds and thousands, and then sent off randomly to all new users. These messages claim to be from beautiful women ever ready for a hookup, and their purpose is to make the user want to contact the women back.

There is no way that happens before the man upgrades his membership, which is sure to cost him a pretty penny. Of course, he can’t physically meet up with the woman then either, because she doesn’t exist. The computer program writing the messages has obvious reasons for not showing up on a date.

Conclusion: FreeSnapHookup.com Is NOT Worth It!

From their admission in the Terms and Conditions, it is obvious that FreeSnapHookup.com is a sham only concerned with making as much money as it can get away with. But this site is not the only one out there ready to rip you off. If something looks too good to be true, always think that it probably is. I advise you to keep your eyes and ears open and to always be objective about anything related to spending money online – especially casual dating. Now, for those looking for more options, I’ve got 20 sites here for you to check out.