Sensual Matches Review: A Must Read Before Registering Free

Have you ever hear the song Wicked Game by Chris Isaak? Well, that’s what I used to think of when hearing the word sensual. However, ever since I cam across the Sensual Matches website, now all I think about is games. What I mean is dating sites playing games on consumers. Sensualmatches.com is nothing but games, point blank. I’d say that if you’re new to the dating scene and you’re thinking about using this site, just – STOP. 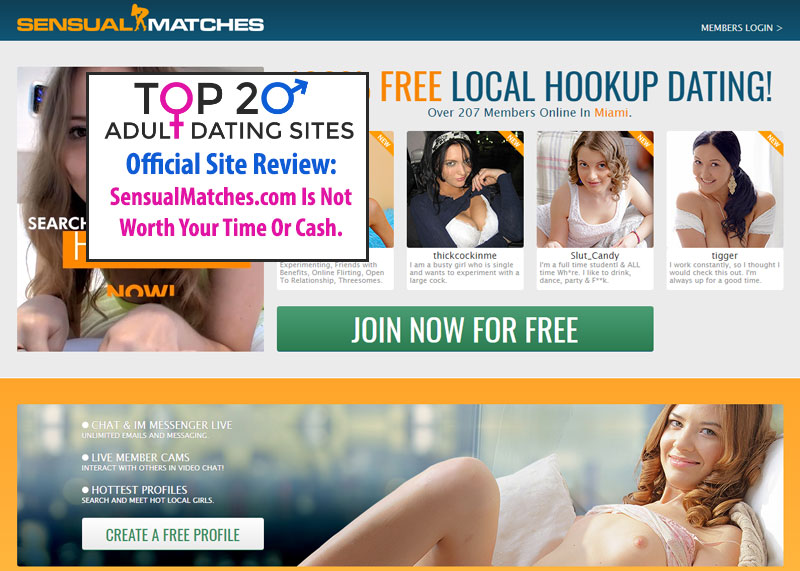 Here’s all you need to know about this dating network before kicking things off and registering as an official member.

At first glance, Sensual Matches looks like a decent hook up site, but thats about it. While they claim that you can meet up with available people for a night of fun, what they actually offer is quite different. Not only are they not actually billed as a dating site in their terms of service, but theyre not even offering anything real.

What they’re selling you is nothing more than a fantasy and its all perfectly legal. By telling you right up front, they’re free to employ all of the typical scamming techniques that sites like this have been using for many, many years.

The first thing that you’re going to notice when you make your free profile is that there are tons of gorgeous women on the site. Don’t worry, it’s all an illusion. The vast majority of these profiles are created and run by the site itself. (Hint: you need to find a site that does NOT create fake profiles – perhaps this.)

It’s all done in an effort to trick you into believing that there are real people here who are looking for fun. If you take a look at the terms of service, youll see that you’ve actually already agreed to let them contact you. These profiles are called Fantasy Members. They’re nothing more than entertainment.

Entertainment Only? Could Of Fooled Me!

By claiming that theyre an entertainment site, they can pretty much do whatever they want. They dont have to provide you with real people to talk to. As long as they are selling you on the fantasy of meeting up with someone, theyre holding up their end of the bargain.

Nowhere in the terms does it say that youre guaranteed a date or a hook up. What it does say is that you will be contacted by their fake profiles to give you the entertainment that youre paying for. Thats all that they offer. This isnt a place for hook ups; its a subscription to spam messages.

As soon as you make your free profile, you are going to start getting messages and chat requests. This is where the scammy part comes into play. You’re not going to be able to respond to any of these unless you pay to upgrade your service.

It’s going to seem like women are trying to talk to you, but thats all part of the fantasy. The only people contacting you are the Fantasy Members that are created by the site. Their hope is that you wont be able to resist so many messages and youll have no choice but to give them your money to read their spam.

Conclusion: SensualMatches.com Is Bad As It Gets, Stay Away!

How do I put it, theres nothing good about Sensual Matches. It’s a scam from the very beginning and they have nothing of value to offer. They’re not going to do anything but take your money and give you nothing in return for it. None of the profiles are real and it’s all just going to be one big waste for you.

You’ll end up wasting your money and you’ll end up wasting your time. Just stay away from this sad dating site and pretend that it doesn’t exist. Youll be much happier in the end. If you’re looking for a website that delivers, then do yourself a solid and try one of the top 20 I recommend. Any other approach is simply foolishness or insanity, sorry to be so blunt about it.